Event 13 - unlucky for some? Not here at Haga parkrun! Our lucky runners and volunteers enjoyed more great weather (still no rain) and the temperature was 'lagom' for running (and holding scanners and timers).

This week we had 22 runners including 7 first timers. 6 of our runners achieved new PBs showing that for them event 13 certainly wasn't unlucky!

As always, a big thank you goes to our volunteers: Nina; Hugh; Wongani; Colm; Davide; Deri; Claire and Ellen

First place this week for the women went to first timer Matleena BOSTRÖM in 20:20, with 100-club member Caroline MANNING in second in a time of 21:44. Krystal NEUMANN completes the fastest females trio with a time of 21:53.

First place this week for the men went to Linus NILSSON in a new PB of 16:58, regular volunteer Colm O CALLAGHAN was second over the line in 19:44 (also a PB) and Roland LYCKSELL was just behind him in 19:53 (a PB too!).

We hope to see you next Saturday for another run, or as I call it: an excuse to eat more saffron buns! Remember we will be running all the way through the holiday season including the 24th ad 31st of December. 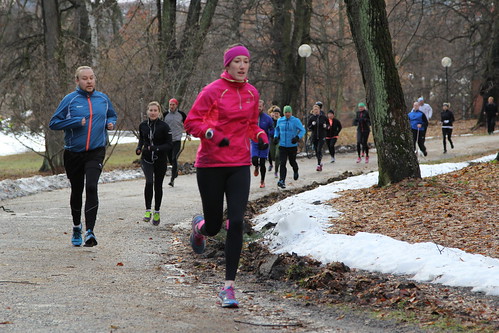 What a difference a week makes in the world of parkrun! So whereas last week we had snowmen lining the course, and the course signs were plunged into lumps of snow, this week all the snow had disappeared on the course and we were ice-free again.

We had the usual 9.15 feeling, when there were just a handful of runners at the start line, but as usual in the winter, everyone arrived in perfect time for the start and so at 9.30 we had 36 eager parkrunners ready to run, including 11 new runners at Haga, plus some tourists from the UK and South Africa.

And what was that we felt just after the start? A few drops of…....could it be…….rain?! I’m not sure that it was enough to count to break our lucky streak of 12 events without any precipitation.

Back to the action and the stats. A speedy visitor to Haga parkrun, Fergal Smithwick, was first over the line in 17:21, just ahead of local regular Dennis Sundman in 17:45. For the women, Sarah-Jane Barrable crossed the line in 20:46, ahead of Caroline Manning in 22:18.

There were 3 PBs this week, defying the slightly soggy conditions underfoot, so congratulations to Jonatan Eliasson, Mira Halldin and Sarah-Jane Barrable! And a big well done to everyone else who completed this week’s event.

Thanks to the volunteers who helped this week, Colm, Hugh & Claire. We’d love a couple more volunteers for next week’s event, so please get in touch if that can be YOU! As most of you know by now, we’re a friendly bunch and volunteering at parkrun is very relaxed so come and join us and see the event from ‘the other side’ sometime.

Photos, photos, we had lots of photos from this week’s parkrun which we have posted on Facebook. Thanks to Colm and Tim for those.

We roll onwards for event #13 next weekend. Hope to see you there! 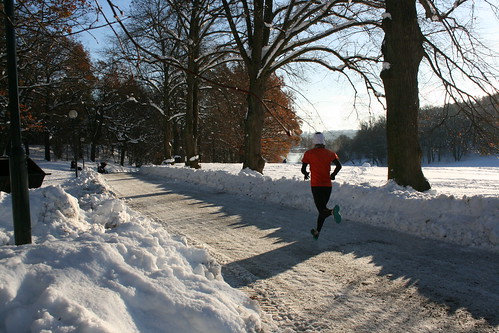 November 12th and 30cm of snow! Not quite what we expected in the 11th week of Haga parkrun. But the paths in Hagaparken had been cleared wonderfully – which is more than can be said for most of the pavements and roads in central Stockholm…… Temperatures at the start were below freezing, but the course was well gritted and ready for action. Snowmen volunteers lined the course together with their human equivalents. We were ready!

We had a small but happy crowd of 16 runners today, including 7 people discovering Haga parkrun for the first time. The park looked magnificent even if the snow on the ground made conditions tougher than normal. Joining the kids sledging down the big hill from the Copper Tents seemed like a good idea......

Despite the snow, Jere Pajunen raced around the course in a spectacular 16.48. (Jere is a orienteerer who has previously raced for the Finnish national team, so hills and tricky conditions underfoot aren’t a problem!) and the first woman over the line was Susanna Tervo in 21:49. And congratulations to Claire Ward-Passey, our faithful volunteer and tail runner who was the only one today to defy the conditions and record a PB. Nice work Claire!

Thanks to all the volunteers and the runners that came today, it might have been a smaller number but it was still everything that parkrun represents – fun, friendly and relaxed. Looking forward to next Saturday and seeing what the weather gods come up with this time! 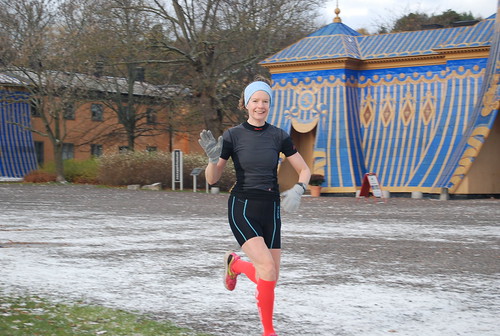 When you have two young children, oversleeping is generally the least of your worries. But the combination on Saturday morning of a bedroom clock that mysteriously re-set itself one hour earlier, two children sleeping in, and a tired Dad meant that it was a slight panic at 8am this Saturday morning! But everything worked out just fine, and by 9am all the course was marked out and we were ready to go....

Conditions underfoot were ok – the sprinkling of snow made things look slippy, but we were happy to approve the course for take-off! First of all we had a celebration for a parkrunning milestone – Harriet Brinton reaching her 50th parkrun, congratulations to her.

Now to the results, today we had 8 new PBs so well done Wongani Mwanza, Olof Wetterling, Sara-Jane Barrable, Slimane Bouabbane, Rebecca Dahlquist, Harriet Brinton, Johanna Nordin and Victoria Sanchez Vera! Officially we had 7 first timers as well - actually it was a few more than that, but people were missing their barcodes (#GIDS/#DFYB!)

Today we also had a new course record for the women, with Catherine (Cat) Taylor crossing the line in an impressive 18:14 which will be tough to beat! Dennis Sundman was the first man over the line in a very solid 17:42.

Thanks to Erik Aschan for taking the pictures today – some great shots, so go in and check them out on the Haga parkrun Flickr page.

p.s. This week we shared the space in Hagaparken with the most bizarre world-record breaking attempt – hundreds of people opening bottles of champagne at the same time. It seemed quite fun at first. But in the end it left us all feeling a bit flat, just like the many hundreds of bottles of wine. Such a pointless & wasteful exercise! It made me glad that I was with the parkrun gang (thanks to Cilla for bringing the coffee and the scones!) and not with the company (still don’t know who it was) being bussed in and out for that. 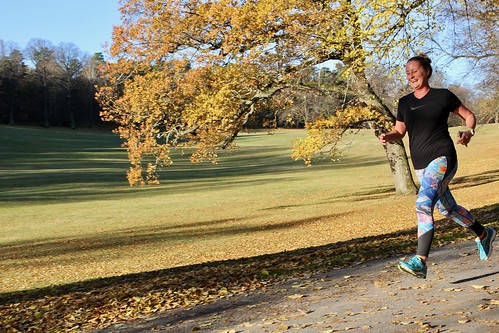 True to predictions, we woke on Saturday to a beautiful blue sky and a wonderful day of weather at Hagaparken. People arrived a little earlier, everyone was a little warmer and the blue sky lifted everyone’s spirits. We even had some new parkrun tape to mark out the funnel (did anyone notice?!) for the 44 runners who finished today.

Great fun to have Gunnar Duren on the start line this morning. For those who don’t know Gunnar has been setting numerous age-grade records over the past few years. Today was no different and with his time of 18.15, Gunnar took the Age-Grage course record with a score of 82.83%. Tough but not impossible to beat I would suggest!

We also had the pleasure of having Mohsen - ‘the café guy’ – with us on the start line. This week he made it round one loop of the park before he had to hurry back to get the kanelbullar in the oven, but he promises he will be back. Great to see so many of you join us in the café afterwards, everyone is always very welcome!

And a couple more statistics.
Raindrops fallen at parkrun to date = 0
Princesses spotted at parkrun to date = 1
Yes, that’s right, Princess Victoria was spotted out walking the course this Saturday morning! Apparently, she was busy on her mobile so the parkrun photo opportunity was missed for this time but perhaps she was just out scouting in preparation for next week’s run……

Thanks also to Colm for taking some great photos this Saturday. Go and have a look if you haven’t done so already.

Finally, below are the official statistics for the placings from this Saturday. Have a great week everyone and see you on Saturday.

This week there were 44 runners, of whom 18 were first timers and 11 recorded new Personal Bests. Representatives of 11 different athletics clubs took part.

Haga parkrun started on 27th August 2016, and since then 323 different runners, including participants from 43 athletics clubs, have completed 542 runs covering a total distance of 2,710 km, and there have been 84 new Personal Bests.