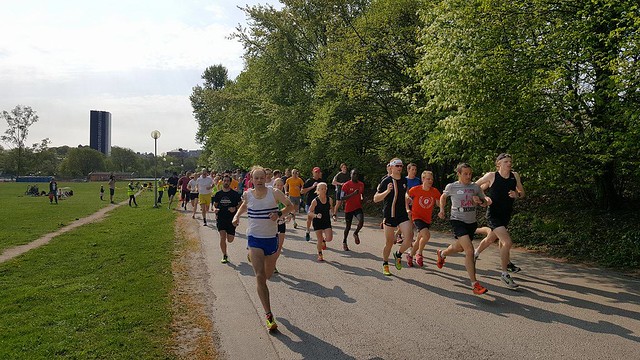 It wasn’t quite the blazing hot sunshine that had been promised to us, but it was still a warm clear morning in Hagaparken that greeted the 68 runners who ran the 35th edition of Haga parkrun. Conditions were again excellent for running, not too cold, not too warm, lagom you could say. A good word for the visitors from around the world that we were hosting this Saturday, along with the fika that we enjoyed afterwards at the Haga Tennis Club. Glad that they are ready for us now - i.e. that there are a sufficient number of kanelbullar for all those who came along!

We had a whole 29 first-timers at Haga parkrun this Saturday – fantastic! A few people that we spoke to had seen the TV report the night before, great to see that this was an instant success in getting more people coming along! There was also 13 PBs for those running, congratulations to Linda Parry, Anita Grönberg, Karin Wetterling, Phatcharee Chareonto, Katrin Engelmark, Guy Parry, Marcos Vicente Herranz, Svante Wetterling, Peter Joergensen, Alexander Herrmann, Nikolai Herrmann, Nick Barrable and Deri Thomas.

Also a big well done to Åsa Nylander who was the first woman home and ran 20:03 to record an age-graded score of 82.63%, to put her 4th on the list of age-graded scores. You can see the full list here: Age Graded League 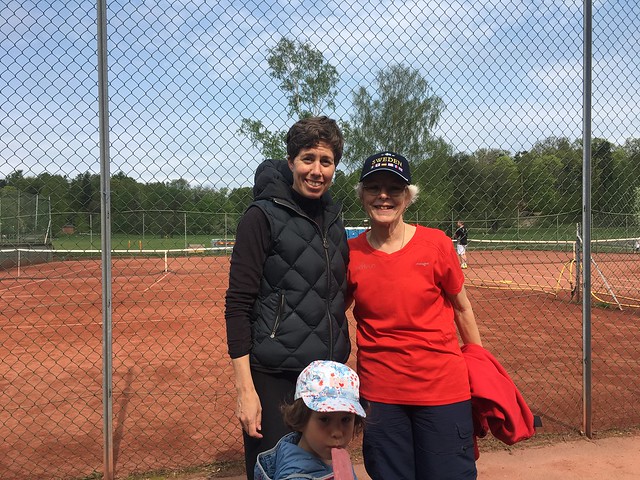 And our hearts were warmed with the sight of Jill Morley and Tail Runner Cilla Pettersson crossing the line together on 51 minutes. Jill was visiting from South Africa, where her home parkrun is North Beach, thoroughly enjoyed walking the Haga parkrun route, a key part of her visit to Stockholm. And it was great to see Cilla & her family back at parkrun and Jill could not have been put in better hands!

The one thing we missed was a photographer to take some great pics for Haga parkrun event #35, we will try and make amends next week! If you know anyone who might be up for doing this, and contributing in another way to our little community, let us know!

Here’s the official summary of results for the day:

This week 68 people ran, jogged and walked the course, of whom 29 were first timers and 13 recorded new Personal Bests. Representatives of 7 different clubs took part.
The event was made possible by 7 volunteers.
Today's full results and a complete event history can be found on the Haga parkrun Results Page.

Haga parkrun started on 27th August 2016. Since then 703 participants have completed 1,663 parkruns covering a total distance of 8,315 km, including 321 new Personal Bests. 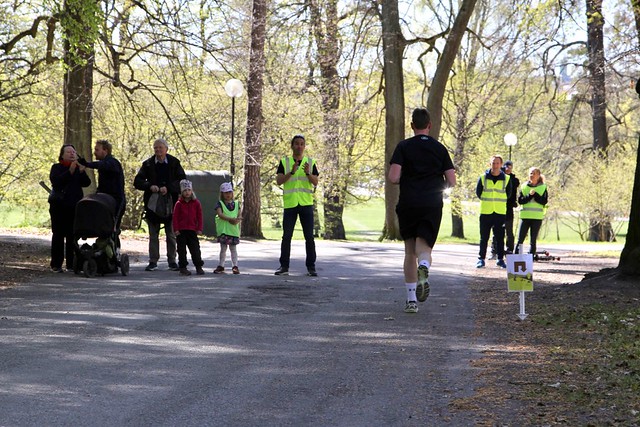 If we stop mentioning that it has never rained at Haga parkrun, will that now be a curse? We don’t know, but maybe it’s time to just it go! 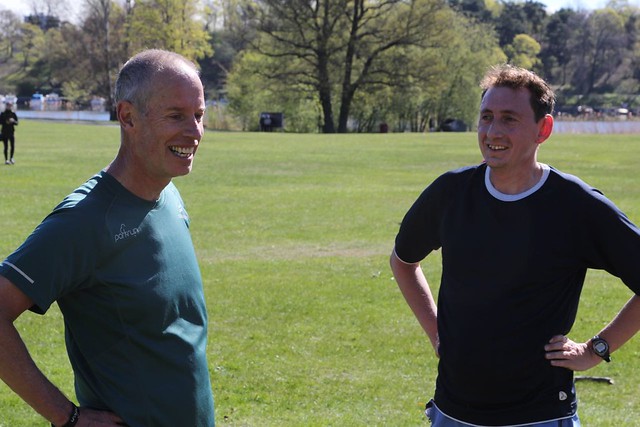 We had great weather and a great turnout for this week’s event, number 34 for Haga parkrun, where we were honoured to be welcoming Paul Sinton-Hewitt, the founder of parkrun. Unlike many things these days (in the age of the cult of personality!) parkrun is about far more than one person, and Paul is far too modest in any case. At the same time we, Haga parkrun, wouldn’t exist if Paul hadn’t make it all happen 13 years ago, so it felt pretty special to have him running with us!

Before we started we made sure that we thanked the volunteers – twice in fact! – who helped to make parkrun happen for the 88 runners this week. Many nationalities were represented this week – I think at least 6 countries, maybe more – including a contingent from the Run With Me Stockholm group, plus runners from IF Linnea, Club Running Stockholm and Akalla Run. Many first-timers and many PBs! 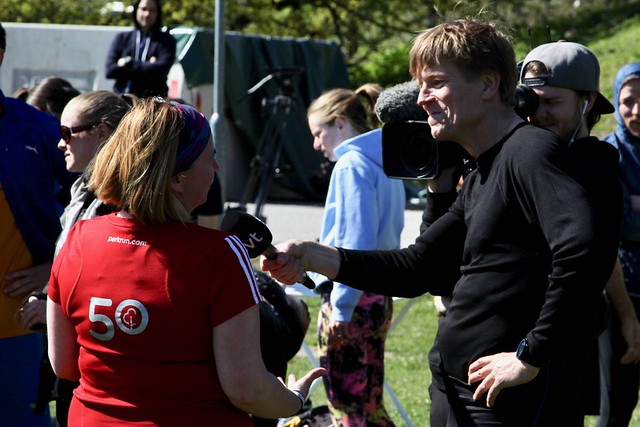 Of course, we also had the TV cameras from SVT with us this Saturday, so thanks to all who took the time to speak to them (the crew were great themselves and were really engaged in the whole event which was cool). We also had Lasse Persson, P4 Stockolms Sportreporter, with us, and who is going to be returning to run Haga parkrun in a couple of weeks. We look forward to seeing him again!

Here are the official results from the weekend:

Afterwards it was over the Haga Tennis Club café, where they were waiting and prepared for us this week and didn’t run out of kanelbullar!

See you on Saturday for Haga parkrun #35! 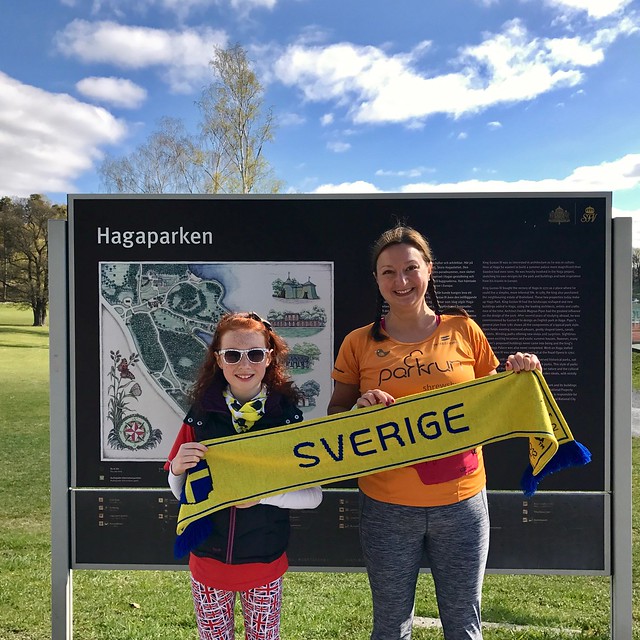 Me and my mum flew to Stockholm on Friday afternoon to do Haga parkrun with you today. This was my 47th different location and mum's 49th. We have done two parkruns in Copenhagen so we thought we would see what it was like across the border in Sweden.

A couple of weeks ago mum ran London marathon and we met Deri at Southwark parkrun the day before so it was nice to see a friendly face at Haga Park when we arrived.

On the way there we met another group of parkrun tourists who were all family members from the UK, Berlin, USA and Stockholm. We also met another nice lady from the UK who had grown up in Stockholm and this was her first time back in Haga park since she used to ride her bike here when she was a little girl. 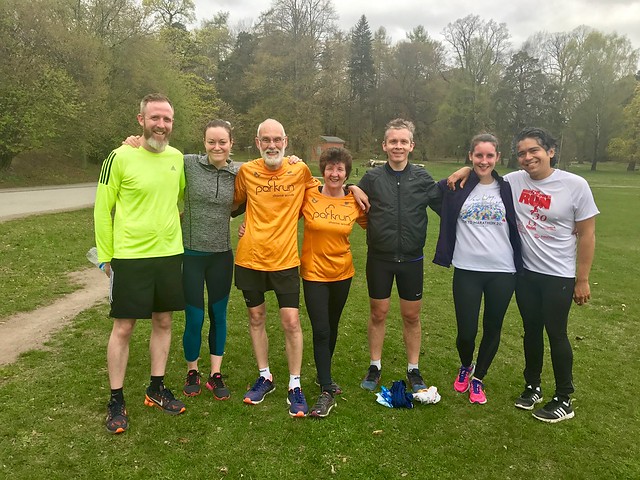 At the briefing Deri welcomed all the visitors from the UK and also Russia and South Africa. There were a lot of tourists today and the sun was shining. Still no rain at Haga parkrun!

The course was hillier than I had expected it to be which was a bit of a shock! There was also a bike race going on in the park so we had be careful not to get run over. The marshals were very supportive and cheered everyone on. I really enjoyed the downhill sprint to the finish, and I just beat my mum!

Mum and I both came first in our age categories which was a nice surprise. We really enjoyed learning about the Swedish tradition of 'fika' having fresh cinnamon buns and coffee after the run. Mum says she ate more calories than she consumed running, which apparently is a bad thing 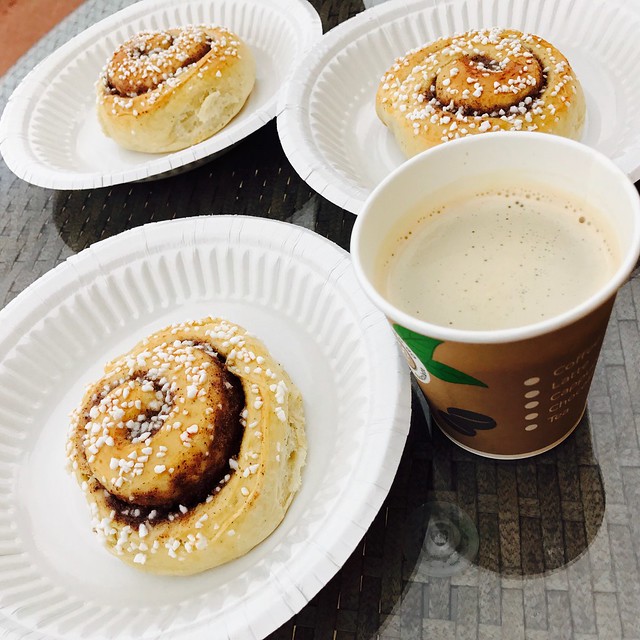 After parkrun we went on a walking tour of the old town and we have been to the cinema tonight to see La La Land. Tomorrow we are going on a boat trip before we fly home.

I have really enjoyed my time in Stockholm and hope that some of you will come and visit us at Shrewsbury parkrun in the future. 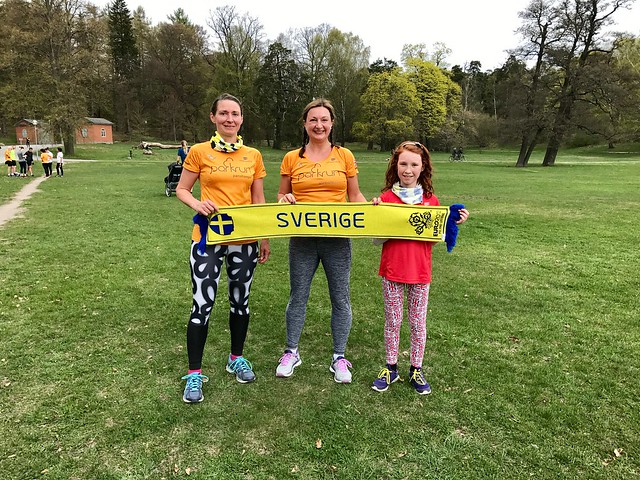 Additionally, here are the official stats from the week:

This week 55 people ran, jogged and walked the course, of whom 27 were first timers and 10 recorded new Personal Bests. Representatives of 12 different clubs took part.

The event was made possible by 10 volunteers.

Haga parkrun started on 27th August 2016. Since then 639 participants have completed 1,507 parkruns covering a total distance of 7,535 km, including 292 new Personal Bests. 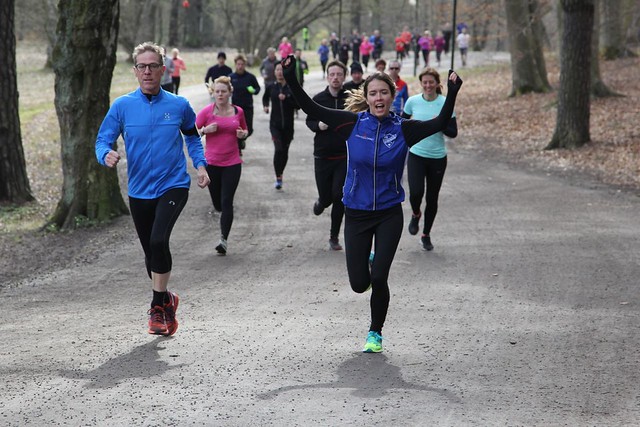 Still another rain-free morning in Hagaparken (we've gone past the jinxing stage now), cold, crisp and great for running. We had 54 parkrunners this morning who joined us for Haga parkrun, some old faces and some new. The pre-race briefing was done in Swedish this week which was quite exciting, and we hope at the same time, understandable! The new km markers were in place, the park was looking as beautiful as ever, and there was a strong team of hi-vis volunteers out on the course cheering everyone around.

First over the line for the women was regular Sarah-Jane Barrable in 20:33, achieving a PB by a single second we were informed in Espresso House when the results were processed. Good work! She was followed by by Monika Pechhacker in 22:43 and then Akvile Preiksaite in third in 23:09.

Finally, thanks to all the volunteers for making parkrun happen for another week! See you on Saturday!