Well it had to happen! Rain. Our 40th event, midsummer of course, and the first sign of rain. At first it was a little light drizzle that we could almost pretend was just a bit of extra moisture in the air, but by time parkrun had got underway, it could be denied any longer! As one our regulars mentioned (thanks Joe!) what are you going to talk about in your run reports now?

Well, we were lucky that there was plenty of other things to talk about instead. 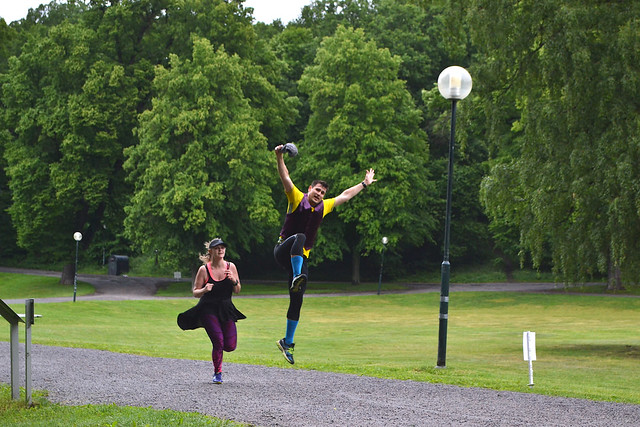 A big shout out to our South African friend Wynand Boshoff wearing his ‘sverigeadräkt’ outfit for midsummer – getting into the spirit of things and looking fine too! 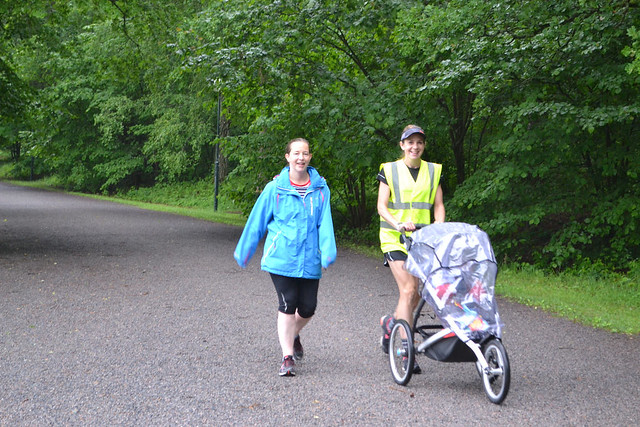 Then, a little bit under the radar, but we want to give a huge ‘well done’ to Caroline Manning to her 25th volunteer role, as she was the Tail Runner/Walker at Saturday’s parkrun. Looking forward to seeing you wearing that purple 25th volunteer t-shirt soon!

Then we had some great coffee and cake at the finish, so once again, a big thanks to Anna, Wynand & Natasha and Hugh for the amazing chocolate brownies, kanelbullar and rhubarb slices!

And what about the rain for the running? Well, it made fantastic conditions for running, and there was a whole load of PBs right the way through the field (including everyone from position 11-18 for example). 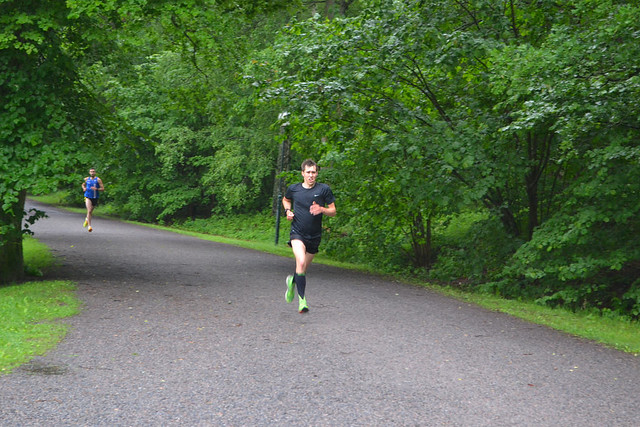 We also had a new course record from our Finnish friend and regular runner Jere Pajunen, in a speedy 15.57, especially on the Haga course. Congratulations to Jere, everyone who ran a PB on Saturday and of course to everyone who took part.

We hope you enjoyed our Midsummer parkrun and we look forward to welcoming you back to Haga parkrun very soon, starting with next Saturday for instance! Here’s all the official stats:

This week 51 people ran, jogged and walked the course, of whom 13 were first timers and 14 recorded new Personal Bests. Representatives of 8 different clubs took part.
The event was made possible by 6 volunteers:

Wow, what a day! The weather was just stunning on Saturday, with a real warmth in the air already before the parkrun began. Such a contrast to just a couple of months ago! Well, we have been here right through the winter, in the cold and the snow, so this is no more than we deserve!

Run Director Leo welcomed the 86 parkrunners to the start today and at 9.30 on the dot, we set them on their way. We welcomed 18 new runners to Haga this week, including visitors from the UK, the US and Australia. Jim Threadgate from Australia, in his 70s, walked his way around the course in just under an hour, proof that as we always say, parkrun is for everyone and all abilities are welcome! Well done Jim.

Despite the heat, we had 18 new personal bests on Saturday, very impressive! Some really great efforts, and it’s great to see all runners improving, right the way through the field. It’s not all about the PBs of course, and it’s hard to keep on improving, but we hope you all enjoy the fact that we give you a time for your run each week and have something to aim for, should you wish to!

Thanks again to all the volunteers who made Haga parkrun happen this week! It’s great that so many people get involved to help out and we hope that you all enjoy the experience when you are on ‘the other side’ and supporting rather than running.

Next week is midsummer, and we look forward to seeing you all there, whatever you may have been up to the day before!

Below are the official results and reports from Event 39:

This week 86 people ran, jogged and walked the course, of whom 18 were first timers and 18 recorded new Personal Bests. Representatives of 11 different clubs took part.

Haga parkrun started on 27th August 2016. Since then 794 participants have completed 1,965 parkruns covering a total distance of 9,825 km, including 391 new Personal Bests. 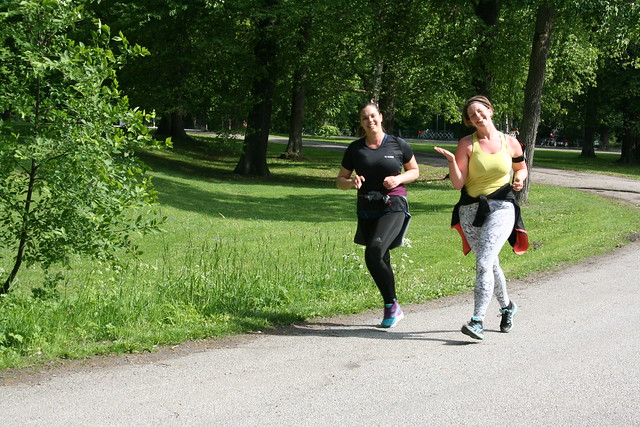 We had a GREAT turnout of volunteers this week, so thanks to everyone who helped this week and made Haga parkrun happen for the 28th time. It was another lovely morning in the park with 23 runners joining us this week for the first time, there's still a steady flow of new people discovering us (and discovering that there's no catch!)

We celebrated Ian Shorthouse’s (visiting from the UK) 300th parkrun, a very impressive milestone! We’re very proud of our park and our parkrun, so it’s always very nice to show it off and get some compliments from visitors.

Today was the first time we had a woman finish first, with Yoie Bohlin, running for the first time, just holding off Austrian Jurgen Pogac by a couple of seconds. With that time Yoie set both the women’s course record, the Swedish women’s record and the Swedish age-graded record (84.57%). A fine haul for a Saturday morning!

We had 14 new PBs this week, well done to all those people, and everyone else who joined us. A BIG thank you to Sarah-Jane Barrable to, who baked some delicious flapjacks to share with everyone to celebrate her birthday. A fine parkrun tradition!

We had a few problems with the results afterwards, mainly due to few barcodes and tokens that didn’t behave themselves when they were scanned. Thanks to everyone who mailed in afterwards – we’ve been able to solve most of the missing times now. Good teamwork!

Below are all the official times and results from Saturday’s parkrun:

This week 64 people ran, jogged and walked the course, of whom 23 were first timers and 14 recorded new Personal Bests. Representatives of 7 different clubs took part.

Haga parkrun started on 27th August 2016. Since then 776 participants have completed 1,879 parkruns covering a total distance of 9,395 km, including 373 new Personal Bests. 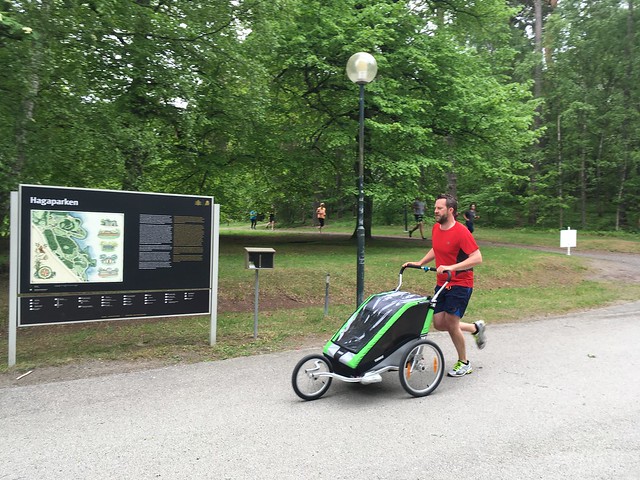 Another beautiful morning in Hagaparken. The trees are now in full bloom, which means that a good part of the course is now in shade, and sometimes sight lines are different than they were in the winter months.

Of course we maintained our 100% Haga parkrun no-rain guarantee TM which of course makes life easier for us all! We welcomed 23 first timers today, including (sadly) a couple of runners from the UK who had booked in to run the marathon, but were injured and decided that parkrun would be the better option. Very wise! Another week with an incredible number of PBs as well, 21!

Thanks to all the volunteers who made this week’s parkrun possible, we are always grateful for your help and support! As Tail Runner today Karin Wetterling took great care of Alan Chandler, who was over in Stockholm with his son Gary, who was one of the people who should have been running the marathon. Alan hadn’t run or done exercise in years, but in the 70-74 age group category, he made his way around the course in 47:45. Similarly we had visitor Tilly Tattersall, age 9, running around with Mum Jenny, in 35:19. parkrun really is, for all ages, and all abilities, you are all welcome!

Lots of action pics from Saturday's parkrun you can find on our Flickr page thanks to Hugh.

The official results summary you can find below, with the full list of results can be found here: http://www.parkrun.se/haga/results/latestresults/

This week 77 people ran, jogged and walked the course, of whom 23 were first timers and 21 recorded new Personal Bests. Representatives of 9 different clubs took part.

Well done again to all taking part and we’re looking forward to seeing you all again next week! 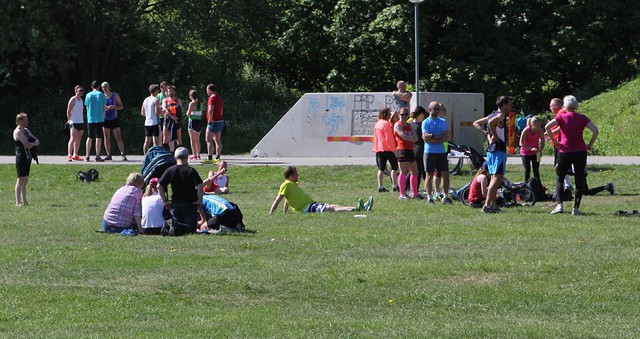 It was a long holiday weekend, and we were blessed with wonderful weather (again) for parkrun. The sun shone, the temperature was ideal for running, and the warm weekend stretched out ahead of us. What a great start to a Saturday 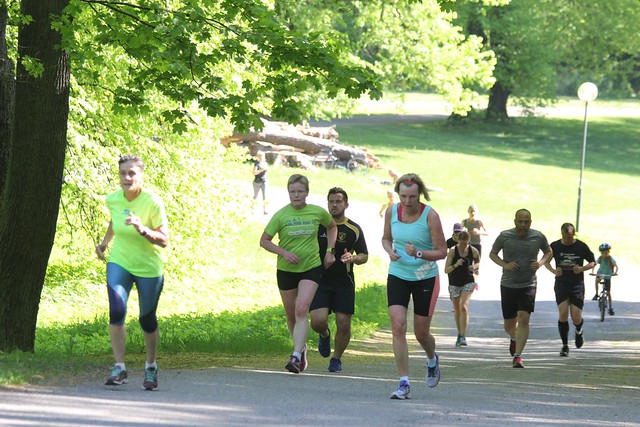 This week over one third of runners were first-timers, a few tourists from overseas visiting us, but also plenty of locals discovering parkrun for the first time. We hope this is the start of a beautiful relationship! 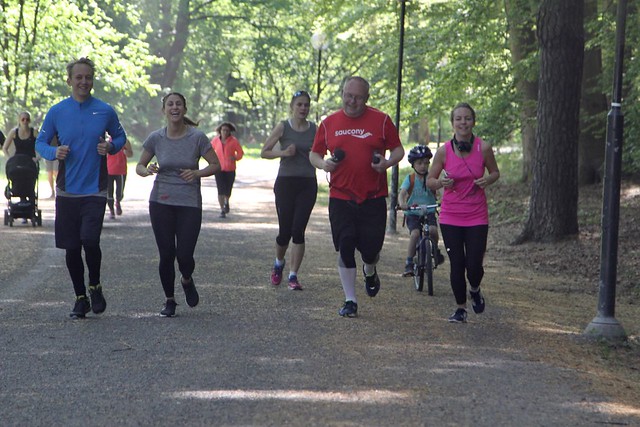 It was also another amazing week for PBs, with 17 runners achieving a PB on the Haga parkrun course. Every one of those a fine personal achievement, well done! 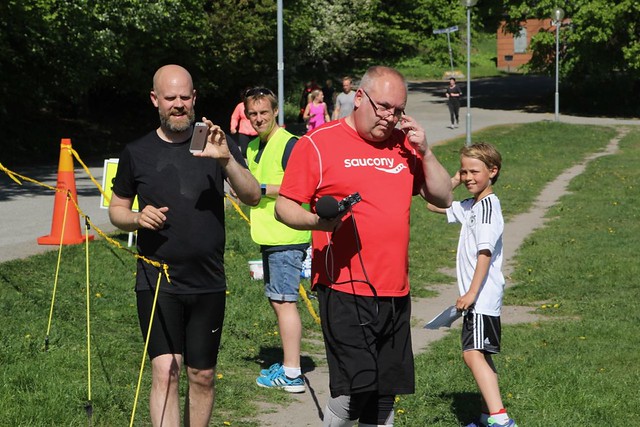 This week we were also joined by our friends at Radio Stockholm, Lasse Persson and Martin Marhlo, who tested out parkrun and recorded some audio for their show ‘Motions-Sverige med Marhlo och Persson’ on the Sunday. Thanks to everyone who got involved and those who were interviewed for the show, it was fun to be a part of this!

Here’s the official placings for those who want to check out the results towards the front of the runners:

Thanks also to Colm for all the photos from last week’s event, it really is amazing that we have so many brilliant pictures from every parkrun. You can see them all HERE.

See you on Saturday!