So many people to thank, and not enough time! That’s how it felt when we did the introduction to today’s 1st year anniversary Haga parkrun. Huge thanks again to all the volunteers who helped yesterday, and throughout the past year. There’s a lot of you out there now, 120 and counting!

And thanks to everyone who has come and run parkrun over the last 12 months and helped to establish Haga parkrun here in Stockholm. Without you, just like the volunteers, there would be no parkrun!

Back to the action. Last week’s rainstorm was just a distant memory as we enjoyed glorious sunshine in Hagaparken. From early on we could tell it was going to be a good turnout, and a steady flow of people continued to make their way to the start as we approached 9.30. Lots of new runners (43!) too today, the registrations continue to go up as word spreads about the event. Thanks to Radio P4 Stockholm for helping this week to promote us!

Jamie Johnson was the man with the camera today, and we got some great group shots at the start of all the runners and volunteers. Thanks Jamie! Then it was time for the off!

You can find the detailed results at the bottom of the page and of course on the Haga parkrun website. An amazing 27 PBs, well done all those people! We had a few problems with a reluctant scanner at the finish for the first 20 runners, most of whom we have now found and placed. We are still missing two people though, the first lady to cross the line in 20:14 and also the 10th placed runner who finished in a time of 18:50. If this is you, let us know so we can update the results!

Afterwards we enjoyed some home-baked parkrun brownies (thanks Anna), handed around in fine style by Wynand. Hope you enjoyed them!

Don't forget to check out the photos from the event, which we have up on our Facebook page and also on the Haga parkrun Flickr page.

We’ll be back next week, same time, same place. We hope to see you there!

p.s. Johanna Nordin was also with us from Mind Sverige, our charity partner. If you didn’t get a chance to chat to her on Saturday, go in and have a look at the valuable work that they do. You can help them in various ways, including volunteering and fundraising. And always look out for people in need!

(Note: we are missing the first lady runner home, through no fault of her own. Hope we can track her down!)

Well it jolly well served us right for whinging about a little drizzle last week: Mother Nature showed us what rain really was for Haga parkrun number 48, just before we got to our 1st birthday, by delighting us with downpour from early morning until the very moment the “submit results” button was pressed.
Was it the “British” weather, the inaugural “sister” parkrun in Huddinge on the same day, or Midnattsloppet later in the evening that kept most of the locals away? We’re not sure, but Haga was flooded (yes, pun intended) with Brits, including a kilted Scotsman (Gavin Fergie from Edinburgh), and even a couple of hardy spectators. Most of them were starting the day with parkrun and continuing on to Midnattsloppet later, so happily refuelled with fika at Espresso House (the tennis club was closed – who’d want to be out doing sport in this weather? Oh right…) 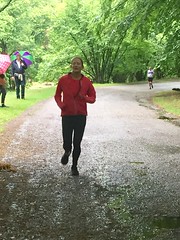 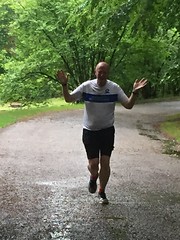 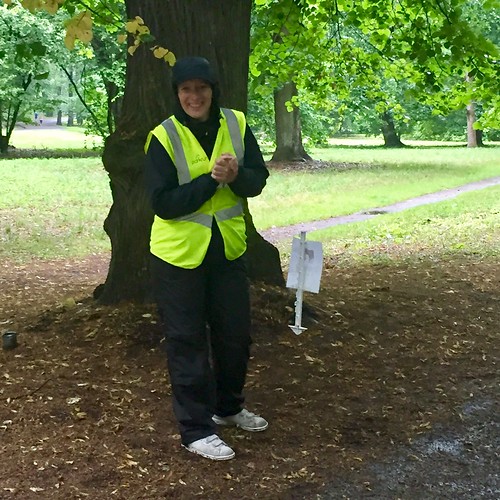 Our awesome volunteer team was slightly more international and included experienced volunteers who held the reins to make sure the newbies didn’t forget the finish line or anything …  Huge thanks to you all: Claire WARD-PASSEY • Sarah-Jane BARRABLE • Leo HEEMSKERK • Jenny HEEMSKERK • Mija THOMAS • Peter HANSSON • Greg RICHARDS • Jeanna FERGUSSON • Fiona REYNOLDS • Lucy LINDGREN and Daniel RAMSKÖLD. Claire and Sarah-Jane practised their swimming (parkrun triathlon anyone?) during set-up when Sweden’s largest and deepest puddle was discovered between them and the parkrun signs. After the event, Sarah-Jane went home to eat lunch, generously allowing Claire to transport numerous dirty, soggy volunteer vests and sopping equipment to be washed and hung all over her flat (extra birthday cake for her next week!) 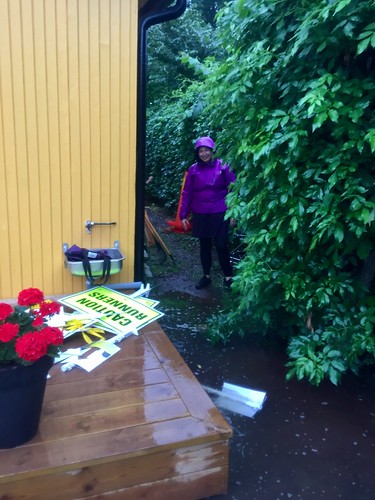 Whilst the Swedish government didn’t agree with our idea of having a National holiday on Friday to celebrate Haga’s upcoming birthday, we are still very excited and will spend this week polishing running shoes and ironing shorts. Please come and join us: bring full waterproofs and umbrellas to ensure that the weather is wonderful. 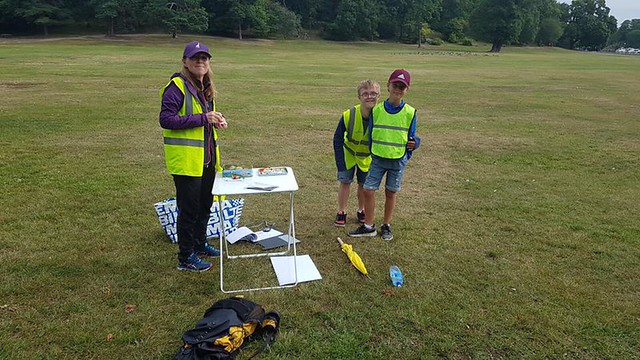 After 46 parkruns in Hagaparken without rain, (Editor: we'll ignore a bit of drizzle on midsommardagen!) something that I can’t imagine would ever be possible in the UK, it finally came on run 47. We’d seen snow before but not rain! In the end it wasn’t as bad as the forecast had predicted and there was no thunder and lightning which had been mentioned.

The “new runners” briefing was introduced at 09:20 which is certainly something that will be continued. The main briefing at 09:25 was held in English due to the high number of British guests who had turned up. These included a young orienteering group who used the parkrun as a warm-up for some more demanding orienteering exercises in the park. 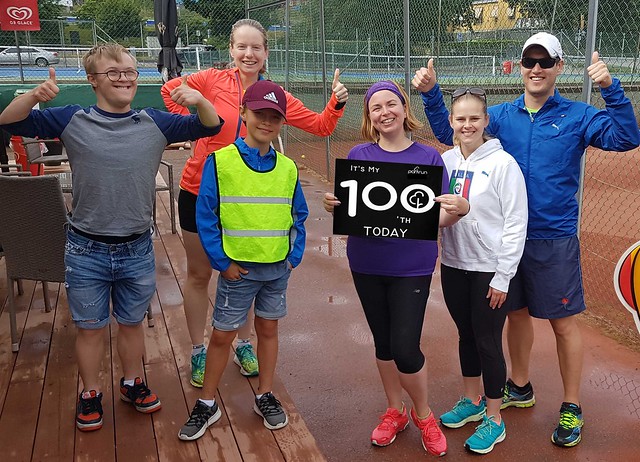 The big news from run 47 was that it was Claire WARD-PASSEY’s 100th parkrun. Well done Claire! 100 parkruns is a great achievement and we expect to see you again running in your commemorative T-shirt as soon as it arrives. To celebrate her achievement Claire brought with her some delicious homemade low sugar brownies. She has promised to share the recipe with us - watch this space!

A special mention and thank you to the volunteers this week. We were a bit thin on the ground but, apart from not being able to take the usual number of photos, we coped well. Lana AL SOUFI made her debut as the tail runner and the Balsom brothers, Timothy and Benjamin, also made their debut as marshals on the course. At the finish line, Mija THOMAS and Peter HANSSON ensured that all the times and position tokens were perfectly synchronised.

Enjoy the last few weeks of summer and see you next week!

Finally, we would like to wish good luck to those of you planning to run Midnattsloppet on Saturday.

This week 82 people ran, jogged and walked the course, of whom 37 were first timers and 10 recorded new Personal Bests. Representatives of 18 different clubs took part.
The event was made possible by 6 volunteers: 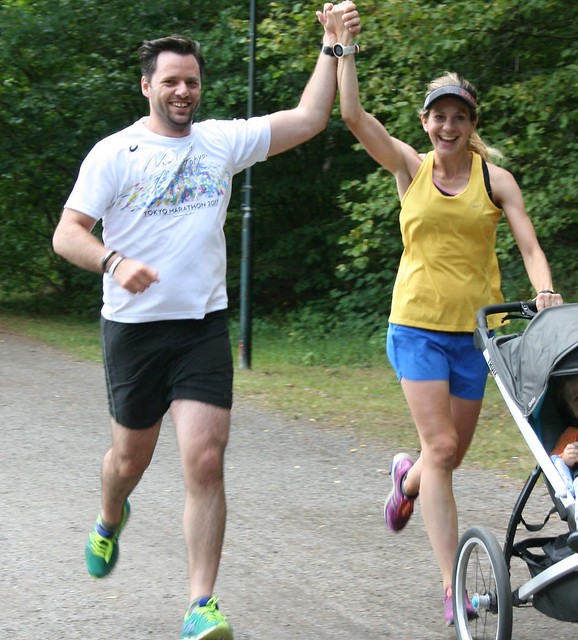 Now we have had Haga parkrun in every calendar month of the year! Event 46 felt a little shaky with the weather, but the rain held off and it was a cloudy but dry morning in the park. One thing we missed to say at the start was this - congratulations to Caroline Manning (pictured above) for running her 150th parkrun on Saturday!

More new faces on the start line – from next week we will be starting with a regular ‘New Runners briefing’ at around 9.15, so all those who are running for the first time can hear a little bit about how parkrun works (and those who are regulars get spared the same information every week!)

Sweden in the summer means swimming in lakes and of course, picking berries, so we brought along some cakes with newly picked berries which seemed to go down well! For those who are interested, here’s the secret recipe! 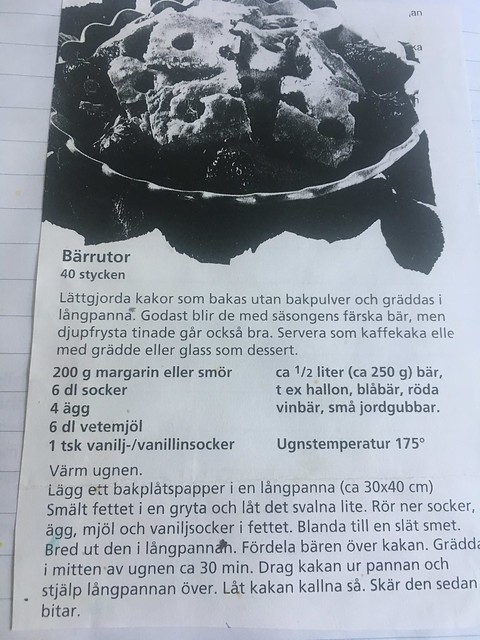 Well done to all those who ran, walked and volunteered on Saturday. Be proud of yourself for getting up on Saturday morning and getting that run in! We had 9 PBs recorded this week, so a special congratulations to Susanne Toscha, Thomas Roos, Natasha Mascharin, Mary Scheuermann, Patrik Palsson, Marianna Rask, Johan Ulvenholm Wallqvist, Emil Råberg and Mikael Sahlberg.

We hope that you like all the photos that we put up from each event, and thanks to Olof for taking the pictures this week (and to Paul for loading them up). You can see all the pictures here. (Editors note: We try to tag as many of you as possible in the pictures so that you can see them when we post them to Facebook, but please feel free to go in and tag pictures of yourself or friends if you want to. You can always befriend me (Deri Thomas) on Facebook – it seems to sometimes work better then).

Have a great week everyone, from all of us at Haga parkrun, and see you next week!

This week 56 people ran, jogged and walked the course, of whom 18 were first timers and 9 recorded new Personal Bests. Representatives of 7 different clubs took part.

This week 50 people completed our beautiful Haga course in the summer sun including visitors from Australia, the UK, USA and Germany - we hope you enjoyed your visit! 14 of our runners were first timers and 11 runners recorded new Personal Bests - welcome and well done, if you were one of those runners.

There were 7 volunteers at today's run, many thanks to them:

It might not be a 'race' but we have a 'Hall of Fame' for our speediest runners today:

And the Hall of Fame since Haga parkrun began on 27th August 2016 is: