Finally we were back in action! After a few weeks of ice covering Stockholm and specifically, our favourite Haga Park paths, our intrepid course testers came back with the long-awaited green light, and a hardy bunch of volunteers was quickly assembled. Amazing how many people made it all happen with short notice. Our volunteers were:

We had visitors from Australia and England amongst other places, including youngest runner in a great hat: Niklas Van Mourik from BRAT Birmingham Running Athletics & Triathlon. Sebastian Palmquist was first over the line in 17:58 and Lena Lönnemark was First Lady in 20:11, a new personal best.

Twelve people ran for the first time such as Isabelle Österlund in 26:50 and Erik & Lotta Hjert and there were twelve new pbs, welcome and well done. A bunch of us headed to Espresso House at Odenplan for a fika afterwards (& there’s room there for more!) including visitor Elaine Kirton who’s busy setting up the new Tetbury parkrun in SW England - good luck Elaine maybe see you in a parkrunning tourist trip one day.

After a couple of weeks without parkrun it was great to be back at Haga again. I must admit even as Run Director I was sceptical that “the show would go on" this week but I was assured by Haga parkrun’s founder Deri Thomas that we were “good to go”.

At 08:30 Deri had already checked the course and reported that apart from a few hundred metres, where the snow had not been removed, the course was judged to be safe. A huge thanks to the Haga Park workers who always do their best to keep the paths clear of snow for walkers and runners alike. In fact, the only time that we are forced to cancel a parkrun at Haga is due to ice on the paths which makes the course unsafe for running. 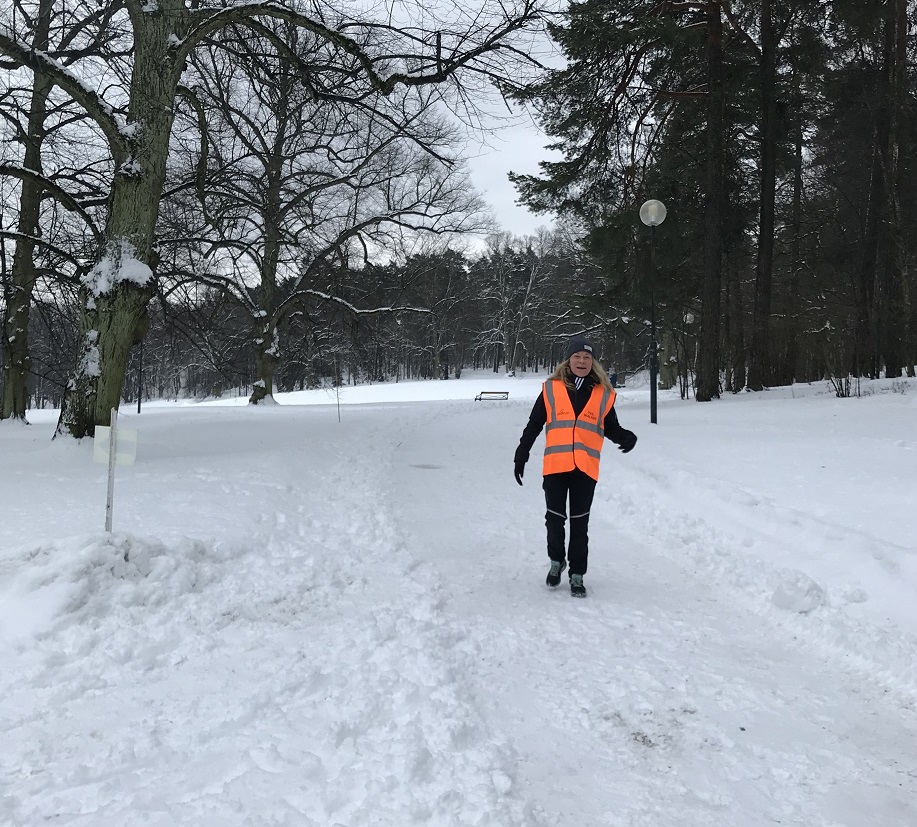 A huge thanks as always to this week’s volunteers because without them parkrun is a non-starter. Peter, Gunilla, Filip and Greg are regulars when it comes to volunteering but it was a first time for Sussie (Balsom) so a special thanks to her. 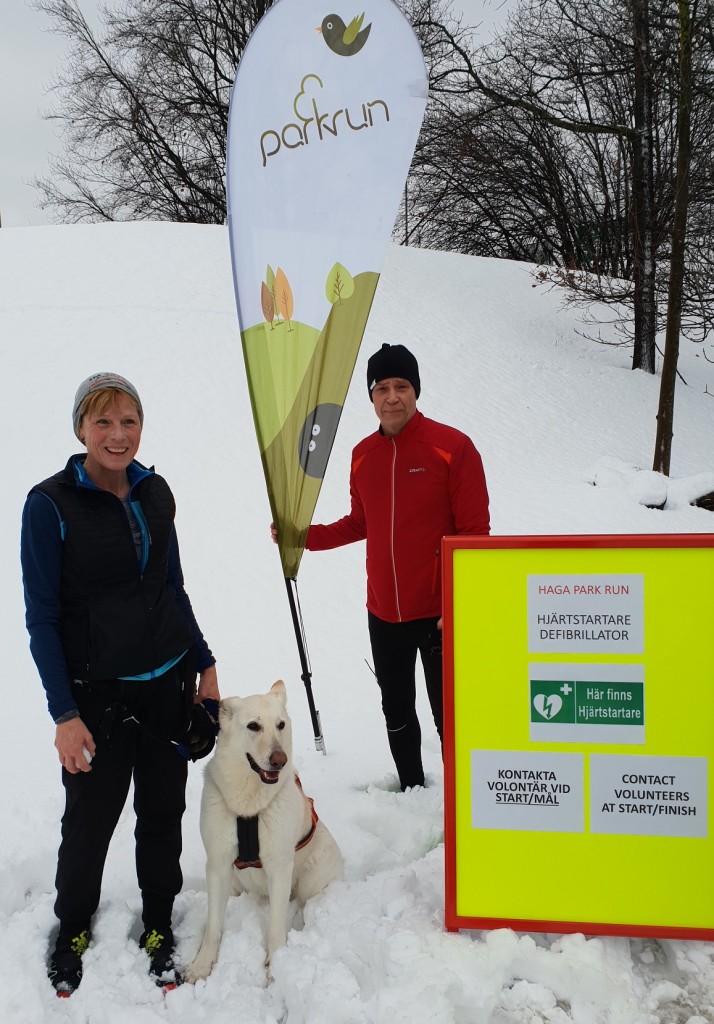 I would also like to mention and thank Marianne and Joakim Nordahl (photo below) for supporting us by providing access to an external automated defibrillator. Whilst I/we hope that the need for a defibrillator will not arise during a parkrun, it is extremely reassuring to know that should such an emergency situation arise, a defibrillator will now be available on a regular basis whenever Marianne and/or Joakim are in attendance. If anyone is interested in knowing more about their company HeartStart and educational course that they run, they will be more than happy to share this with you. 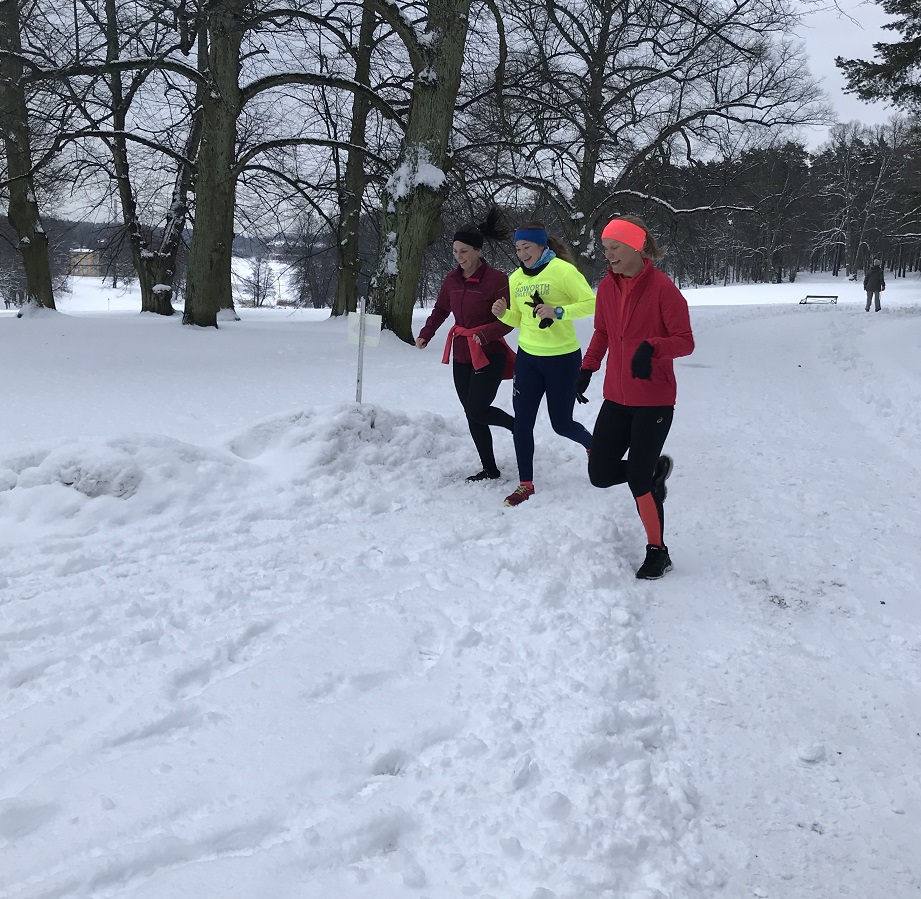 We had an impressive 56 runners this week. The number of tourists and first-timers, however, was fewer than normal but our guests from England and Scotland seemed to enjoy themselves. There's lots of photos now available on the Haga parkrun Flickr page and of course on our Facebook page as well.

A final mention to Nick Barrable for completing his 50th parkrun this week. Well done Nick and hopefully we’ll be celebrating your 100th run during next year. 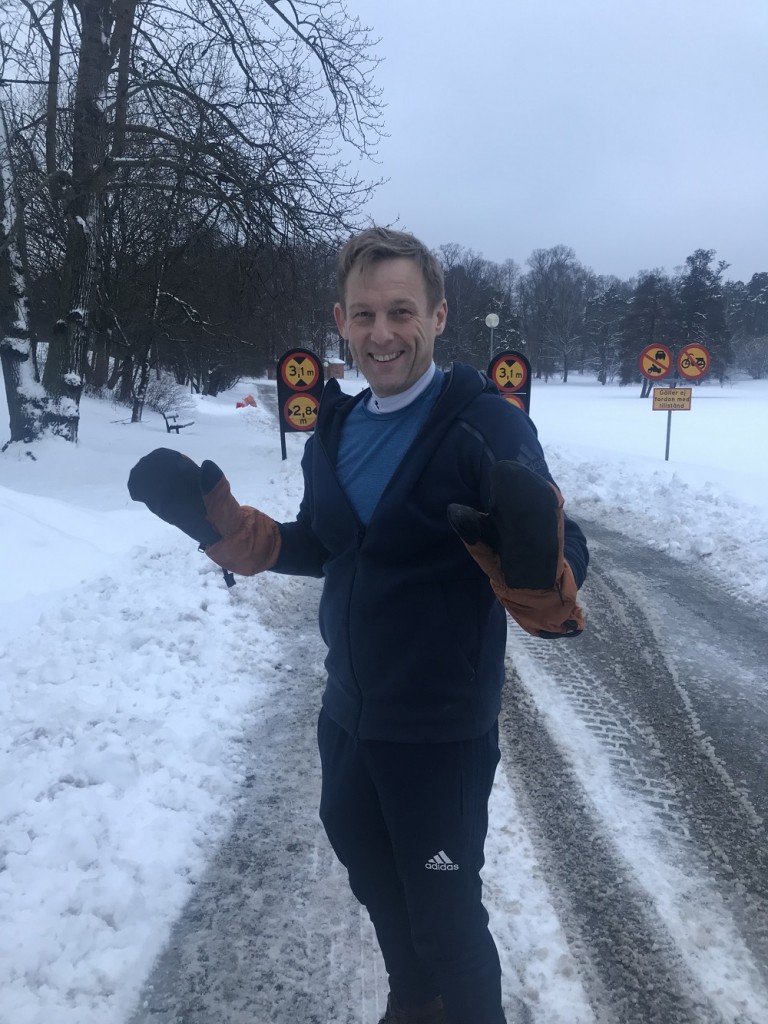