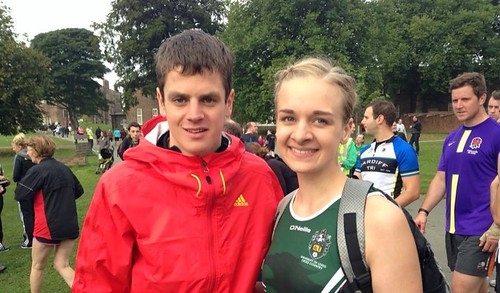 Welcome to this week's newsletter. Hopefully by now most people know that parkrun is offically not a race, but a run for everyone!

Of course parkrun means different things for different people. But just because it’s not a race doesn’t mean that you can’t use parkrun as a great tool for improving your fitness, using others around you to push yourself, and to see your weekly parkrun as a motivation for coming back and trying to better that time each week! You choose what you want it to be for you.

Many elite athletes like to run parkrun as it’s such a convenient way to get a timed, measured, regular 5km run into their training schedule. Next week I’m travelling back to the UK, and whilst I’m there, I will – of course – run parkrun in the city I’m visiting – the beautiful city of York. What’s fun to see is that the course records at York are held by no other than Jonny Brownlee (Triathlon Olympic Silver medallist in Rio pictured above at Temple Newsam parkrun, Leeds, UK) and Laura Weightman (Olympic 1500m finalist in 2012 & 2016)!

Here in Sweden,, the invite to run Haga parkrun has been extended far and wide, and I hope that we’ll see some of Sweden’s best runners on the start line amongst parkrunners of all ages and abilities over the coming months. We hope that you’ll be inspired by lining up alongside these great athletes, but remember that in parkrun and in running in general, the main competition is with yourself! 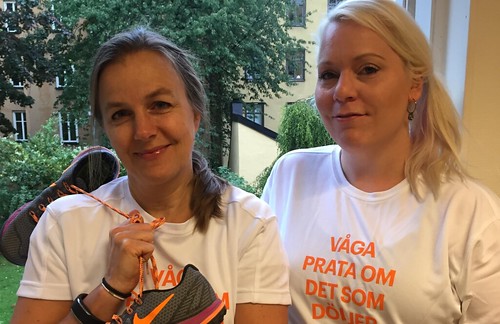 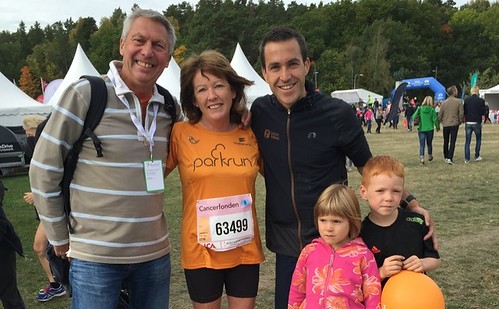 This previous weekend, I had the pleasure of saying hello to Dave Moorcroft who was visiting Lidingöloppet with his wife Linda, who ran the Rosa Bandet 10km race on the Sunday proudly wearing her parkrun t-shirt!

For those who don’t know, Dave is the former world record holder over 5000m, running 13:00 exactly at the Bislett Games in Oslo in 1982. Dave is a big fan of parkrun, and the piece below is taken from a recent parkrun UK newsletter where he talks about what running means to him:

"On a spring morning in 1985 I did what around 300 people now do every Saturday. I wandered from my home in Coventry to the Memorial Park, and I went for a run.

It was a far cry from three years earlier in a packed Bislett Stadium in Oslo when I had one of those moments that runners occasionally have. I felt like I was flying, like running was just so easy. On that day I broke the 5,000m world record in a time of 13:00.41.

But in Memorial Park I was alone. I'd been injured, had an operation in Germany, and hadn't run for months. I was about to take my first steps on the long road back to fitness.

I only ran for 100 yards, but it was one of the most enjoyable 100 yards I have ever run. In that solitary moment I learned to love running again.

That run was my first since the Los Angeles Olympics the previous year, which was one of the low points of my athletics career. I had gone into the 5,000m final with a groin injury and was relying on cortisone injections to manage the pain.

Despite my best efforts, I finished last - by a long, long way!

As I crossed the finish line I was using words like 'disaster' and 'tragedy' in my mind. I knew these words were totally inappropriate - we all know what disasters and tragedies are and losing a race isn't one of them - but that's how I felt. I was devastated. I didn't want to run, and I couldn't run because of the injury.

That final act at the Olympics rekindled why I run and why I love it so much. I needed that awful experience of coming last in an Olympic final and then being unable to run for a long time because of injury to remind myself of why I loved running - which is purely because I can.

I have been running since I was 11 and it underpins who I am as a person. For a period of my life trying to win became almost an obsession, but the more balanced me now knows that the running, not winning, was my primary motivation. Running gave me confidence and helped me recognise my weaknesses. It's certainly a great leveller.

Our sport is unique in that anyone can toe the same start line as greats such as Paula Radcliffe in a mass participation event, and having top-level athletes getting involved in a grassroots movement like parkrun is really special. All different people at all different levels can share the same experiences at the same time at the same venue.

I’m a real advocate of parkrun and things like that because I just love seeing people do the thing I’ve loved doing – seeing people whose lives have been transformed after discovering running.

For all of us, no matter what pace we run, it often takes a long-term injury or illness to make us realise how lucky we are to do this thing we call running. It's the most natural of human movements, it's what we are born to do, and we should never take it for granted."

If you are interested in setting up your own parkrun event in Sweden, or to find out more, get in touch with us here